Visit Amsterdam – The city of canals

Amsterdam was founded as a small fishing village in the late 12th century along the Amstel river, and was dammed to control regular flooding, hence the city’s name is derived from the ‘Amstel dam’.  Amsterdam became one of the most important ports in the world during the Dutch Golden Age of the 17th century.  In 1921 the town of Sloten was annexed by the municipality of Amsterdam, and its’ the oldest part of the city, dating back to the 9th century.

Amsterdam is of course well known for its nightlife and festival activity. It boasts a huge amount of bars, terraces, nightclubs (f.e. Melkweg, and Paradiso), cafe’s, pubs, and well, I could go on and on.

Leidseplein is one of the most bustling squares in the city. It’s full of bars surrounding the big terrace covering the square, while the streets around the area are all filled with restaurants, eateries, bars and even a coffeeshop or so. It attracts street artists of all kinds, who perform their shows for for a donation. If you wander into the Leidsestraat, the street that leads to the square and goes all the way to the Spui (another famous area) which is full of clothing and accessories stores, snack places and more.

On the square you can also admire the monumental Stadsschouwburg (Municipal Theatre), an enormous Neo-Renaissance building built in 1894.

Rembrandtplein is another bustling square in the heart of Amsterdam and was named after the famous Dutch master painter, Rembrandt van Rijn, creator of works such as the Night Watch.  You can even find a large statue of him in the middle. In the short street leading to the Flower Market, you can admire the Tuschinski theater built in 1921. And last but not least, the streets around are filled with clubs, discos, cafés and bars to keep you busy all night and even beyond.

Center piece is of course the Royal Palace (het Koninklijk Paleis) built in the 17th century. It is no longer the royal residence, and only used for receptions. For those who enjoy visiting old churches, there is the Nieuwe Kerk across from the palace. On the other side is a square with the obelisk shaped World War II memorial monument. An old stock exchange building now used as a concert hall and an exhibition space can be found a little bit towards the Central Station. And as you would expect with plenty shops and restaurants to make it interesting. If you walk into one of the alleys you will end up in the Kalverstraat or the Nieuwendijk. The busiest shopping streets of Amsterdam.

It is a community area walled of from the outside world in the center near the Spui. It was established in 1346 as a residential area for a religious order (the Begijnen). Once you enter, it’s like stepping into the past, into another world. Don’t miss it!

If you wander of into the street from the monument square, you’ll enter the famous Red Light District named thus because of the neon lights in the windows the women are posing. 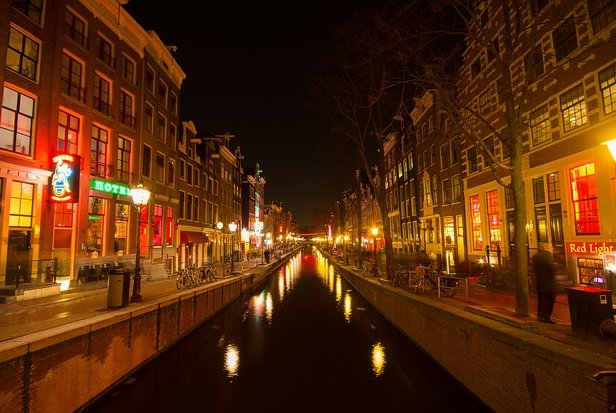 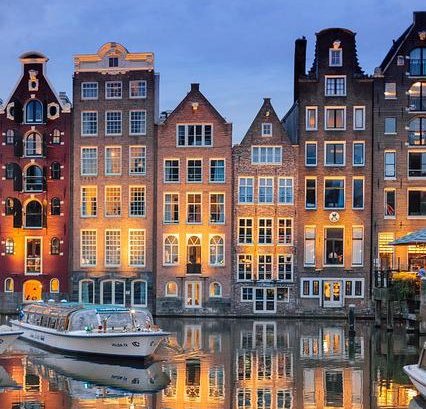 A tour through the canals

A visit to Amsterdam would not be complete if you don’t go on one of the boat tours through the canals.  And if you do it at night, bridges and notable houses are illuminated making it even more enchanting.

There is so much more to see and do in Amsterdam, but let’s round it up with some interesting links if you want to read more about the ‘Venice of the North’.